Frenetic, non-stop racing in the world of Fast & Furious 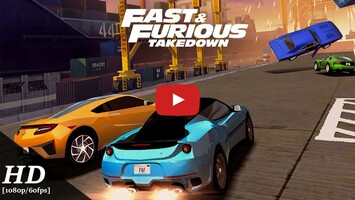 Advertisement
Fast & Furious Takedown is a 3D racing game where players join Hobbs, Leti and the gang starring the popular Fast & Furious saga. Just like in the movies, there are tons of races where your objective isn't just to make it to the finish line first -- but also finish off your opponents as you go.

Control systems in Fast & Furious Takedown are very simple. Tapping on each side of your screen has you turning your car while swiping upwards activates turbo mode. If you hit another player hard enough, you'll swerve him off the road and out of the game.

When you start out playing you'll be limited to having a single car to choose from in your garage, but as you play and level up you'll find there are a lot more to earn as you play. That said, winning new vehicles will mean completing tons of races and different missions where you'll have to be the fastest, or -- the most furious.

Fast & Furious Takedown is a hectic racing game that successfully brings together all the action of the Fast & Furious movies to the world of video games. Both its graphics and soundtrack are spectacular.
Reviewed by Andrés López
Advertisement

Why is this app published on Uptodown?
(More information)

Because he does not let me enter the game, he tells me that there is no internet

Is it also for computer?

Extreme Car Driving Simulator
Take your car to the limit in a realistic environment
Asphalt 9: Legends
Drive at top speeds through streets all around the world
Asphalt 8: Airborne
Spectacular races on your Android
Dr. Driving
Drive carefully around the city
Real Racing 3
The most realistic simulation on an Android terminal
Traffic Rider
Get on your motorcycle and whizz at top speed through traffic
Hill Climb Racing 2
The most entertaining 2D racing game you can find
Pixel Car Racer
A racing game with an RPG experience that feels like a sandbox

Sahadan
Live results and stats for bets on this sports app
ran
News about Bundesliga and the rest of German sports
Dress Up Games
Use your fashion sense to create fantastic outfits!
Quick Game
Atm Rush
Collect money and cash out at the end
Angry Birds Dream Blast
Pop colored balls with Angry Birds
NBC Sports
Enjoy sports programs with NBC Sports
Growtopia
An MMORPG that lets you do whatever you want